What are Chigger Bites? – 6 Effective Ways To Treat Them! 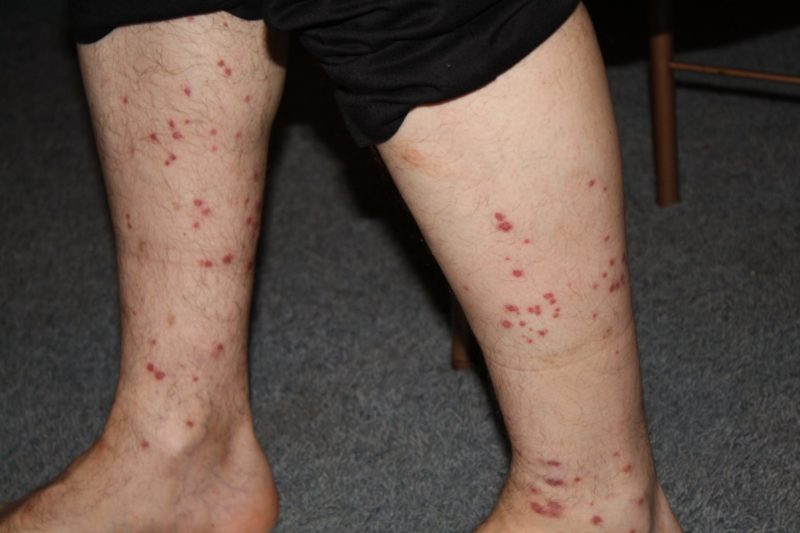 What are chigger bites? Chiggers are the common name for the Trombiculidae mites at their larval stage. They live in moist and wet areas. When they stick to the skin of a living being, they bite and suck blood leading to allergies and itching. Their itchy bites appear in clusters of red and swollen pimples.

Take off your clothes, take a thorough shower with soap, and use an anti-itch cream. Always wear long boots and long pants with no exposure to skin. Apply a repellent and your clothes with a clothing-based repellent.

In fact, they aren’t really biting at all, at least not in the way we typically think of bed bites.  But regardless, they are very uncomfortable, as they itch intensely and are often located very close together and in large numbers on your skin.   Often there are so many bites; they almost resemble a severe rash.

If you think Chiggers have bitten you, we’ll go over the steps you need to take right away to keep them from getting worse.  But first, let’s take a quick look at what are Chigger bites and what Chigger bites look like, so you can be sure that’s what you’re dealing with. Chiggers are the common name for the larval stage of the Trombiculidae mite, which loves to live in damp, moist grassy areas with no direct sunlight.   Trombiculidae mites prefer warm weather and can generally be found in warm climates, like the Southern and Western United States.

Trombiculidae mites progress through a life cycle to become adults.  Trombiculidae mites, while in the larval stage, are called Chiggers, and they need to feed on the skin to progress to an adult.   They cling to grass, waiting for a victim to come by.

When one does, they will jump onto it and find the first area of exposed skin they can find.  Using claw-like legs, they rip the skin open, inject their saliva, which contains a skin dissolving enzyme, and then drink it using a straw-like appendage.

The ripping of the skin, combined with the enzyme, causes a skin reaction that varies in severity.  Serious reactions are widespread, but the itching doesn’t begin right away.  The reaction generally takes 1-2 days to show up and begin itching.

One “chigger bite” is bad enough, but often you’ll have multiple chiggers jump on you at one time, causing multiple bites.  Chiggers hatch in large groups from eggs.  They don’t stray far and often clump together on grass and leaves.

Once on you, each Chigger will often bite you multiple times while on your skin to engorge themselves, so they can drop off and continue growing. Chigger Bites are distinctive from other bug bites, although they are often confused with flea and bed bug bites. Chigger Bites have the following unique characteristics: Early treatment of Chigger Bites will lessen the long-term discomfort.   If you think Chiggers have bitten you, or are already showing signs of Chigger Bites, do the following:

The best treatment for Chigger Bites is to avoid exposure to Chiggers.   But this isn’t easy to do unless you know where they are.  If you are going outside, especially into an area that you know has Chiggers, do the following:

That is if you don’t scratch them. Scratching them and breaking the top of the skin can get infected, leading to very serious or life-threatening conditions.

Avoid scratching them at all costs! If you do, and the bite area is warm to the touch, or begin running a fever, seek medical attention immediately.

While we have your attention, let’s dispel a few common and very incorrect myths about Chiggers:

Chiggers do not generally cause any serious medical complications when properly cared for. You will want to watch out for signs of infection until the bites heal, which generally takes about a week.

Now that you know all about chigger bites and how to distinguish them, we hope you can always turn to experts on time and get treated immediately. Although we also hope that such a situation may never arise. But better be safer than sorry! Isn’t it?

Chigger Bite vs Mosquito Bite: What Is The Difference?