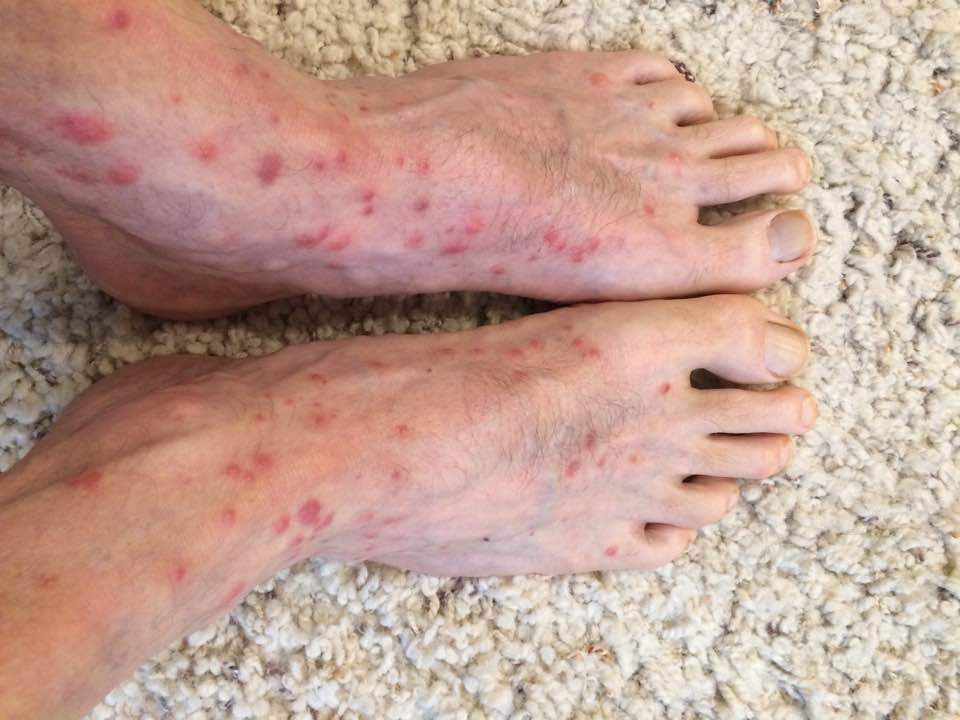 Chigger Bites itch intensely, and if you’ve ever been bitten, you’re sure to not forget the experience anytime soon.  For those unfamiliar with Chiggers, identifying Chigger Bites from other bugs bites can be difficult.  Chiggers Bites have some tell-tale characteristics though, that make identifying them very easy, once you learn them.

Chiggers are are the larvae stage of Trombiculid Mites.  Trombiculid Mites generally live in areas of tall grasses and woodlands, but can also be commonly found on golf courses and lawns.  They are also commonly called Red Bugs, Red Mites, and Harvest Mites.

Chiggers are very small and difficult to see.  In order to progress from larva, to adult Chiggers, they must feed on skin, and preferably human skin.  But they aren’t too picky, as any animal with skin will suffice.

Trombiculid Mites larva wait in the grass and foliage for a host to walk by and jump onto the host, and within 2 hours, find an open patch of skin.  Using their legs, they rip a hole in the skin, inject their saliva, which contains a skin digesting enzyme, and ingest the digested skin using a straw-like appendage.

They feed for 3-4 days, then drop off.  The remaining “bite” mark within 24-48 hours becomes highly inflamed, swells up, and forms a red pimple-like mark, that is itches intensely.  Chigger bites can begin itching within 3-4 hours of being bitten.

>> Learn more about Chiggers in our Chigger Guide.

Like most other bug bites, Chigger Bites form red marks on the skin, and itch after the bite actually occurs.  But that is where the similarities stop.   Chigger Bites have a number of unique characteristics that make identifying Chigger Bites, actually very easy:

If you think you’ve been bitten by Chiggers, it is very important to begin treatment immediately.  The longer treatment is put off, the more intense the swelling and discomfort will be.

>> Check out our Chigger Bites Photos page for lots of photos of chigger bites you can reference.

Another common misconception about chigger bites is that by itching the bites, they’ll spread.  This is not true.

What can happen though is that as Chiggers jump onto your body, and migrate to an area of exposed skin, they will not always bite and begin to feed immediately.  Chiggers can often stay on your body for up to 4 hours before beginning to feed.   Because of this delay, it can sometimes take a little time for the series of Chigger Bites to fully show itself, resulting in what appears to be a spread of the bites.

To avoid this “spread”, it is very important to shower as soon as possible after you think you’ve been exposed to Chiggers.  This will wash off and kill any remaining Chiggers that may not have bitten you yet, and minimize the number of Chigger bites you receive.

There is a very common belief that Chiggers embed themselves into the host’s skin and remain there.  Thus many will recommend using nail polish, alcohol, and even bleach on the bite marks to kill the Chiggers.  Contrary to this belief, Chiggers do not embed themselves in the skin.  In fact, many of these treatments will just make the bites even worse, by irritating them further.

Chigger bites should be treated as early as possible, to reduce swelling, inflammation, and irritation.  The earlier a bite is treated, the less painful and uncomfortable it will be.   Bites generally begin showing on your skin within 3-4 hours and will last for up to a week.  They are most painful around the 2-3 day mark.

The following are effective treatments for Chigger Bites:

How to Prevent Chigger Bites?

Once a person has been bitten by Chiggers, their interest in preventing any future Chigger bites is considerably high for most.  Fortunately, learning how to prevent chigger bites is pretty easy:

Can Chiggers Live in your Bed?